This surgery consists in cutting out the so-called pouch from the stomach, which serves as a mini stomach and has a volume of several dozen millilitres, and connecting the newly-created pouch to the intestine by means of an anastomosis in such a way, as to reduce the length of the intestine actively digesting and absorbing the food eaten.

The difference between GB and MGB is as follows: the “mini” stomach created as part of the mini gastric bypass surgery is more oblong thanks to which the anastomosis between the stomach and the intestinal loop is performed in the lower part of the abdomen, which eases suturing. Since only one anastomosis needs to be performed, the intestine is divided into two parts – the enzymatic loop and the common loop, which also serves as a nutritional loop.

The new gastrointestinal hormonal activity resulting from the introduced anatomical changes is also of high importance to the patient due to the therapeutic impact of bypass on type 2 diabetes.

Bariatric consultation with the surgeon

If you are considering surgical treatment of obesity, make an appointment with our surgeon. During the first appointment the physician will assess the degree of obesity, take medical history of co-morbidities and obesity complications.

You will receive information on possible treatment options and be pre-qualified for the selected surgery. You will also receive a diagnostics plan preparing you for the surgery.

We want to gather as much information as possible about your health condition so that further treatment is as safe and personalized as possible. We schedule a diagnostic appointment and a planned surgery date.

We offer our patients a full diagnostic package which includes all necessary tests and specialist consultations required to perform the surgery. Typical diagnostic scheme:

The diagnostics is coordinated by an experienced specialist and your attending surgeon.

We begin treatment prior to the surgery, in the diagnostic phase. The nutritionist prepares a nutrition plan, which will help you prepare for the post-surgery changes, achieve initial weight loss and reduce liver steatosis. This specialist also provides you with nutrition education including the principles of proper nutrition to be followed before and after surgery. Simultaneously, the psychologist will equip you with the psychological means of coping with the transformation that awaits you.

You follow a nutrition plan. The attending physician, nutritionist and psychologist stay in permanent touch with you, providing you with support and advice.

You will be admitted to the Surgical Ward after a period of a few weeks following the completion of diagnostics. The patients usually stay in our hospital for 4 days:

After the end of the surgical treatment we stay in permanent touch with our patients via phone or e-mail. In addition to this, we will also meet on the follow-up appointments.

The surgery yields very good outcomes and is intended for patients with significant obesity, in whom we want to use a restrictive-malabsorptive method but at the same cannot perform a traditional gastric bypass surgery because of various reasons.

It is especially recommended for patients with type 2 diabetes, due to its effect on hormone activity in the gastrointestinal tract and sensitizing peripheral tissues to insulin. Many patients have been successfully cured of this most dangerous consequence of obesity after the mini bypass surgery.

Thanks to the mini gastric bypass surgery the patients who prefer to eat sugary foods for every meal, will not absorb all the sugars they take in, and in some cases, they may not tolerate them well, which will effectively discourage them from eating sweets.

Due to the fact that, the surgeon is forced to operate in both the upper and lower abdominal regions during the mini gastric bypass surgery, a large number of intestinal adhesions, which are a common consequence of the lower abdominal surgery, certainly creates added difficulty at the time of surgery.

In patients with inflammatory bowel disease such as Crohn's disease, sleeve gastrectomy is the preferred method of operation, because it is does not use the intestine.

In young women planning to become pregnant in the future, the mini gastric bypass surgery may be associated with an increased risk of foetal and maternal exposure to deficiencies in macronutrients and micronutrients during pregnancy.

Pregnancy is also a period when we should be more concerned about the proper development of the foetus rather than weight gain.

Our approach to obesity treatment is as follows: the patients who ignore the nutritionist’s and psychologist’s recommendations or consider them irrelevant are not ready for the surgery. 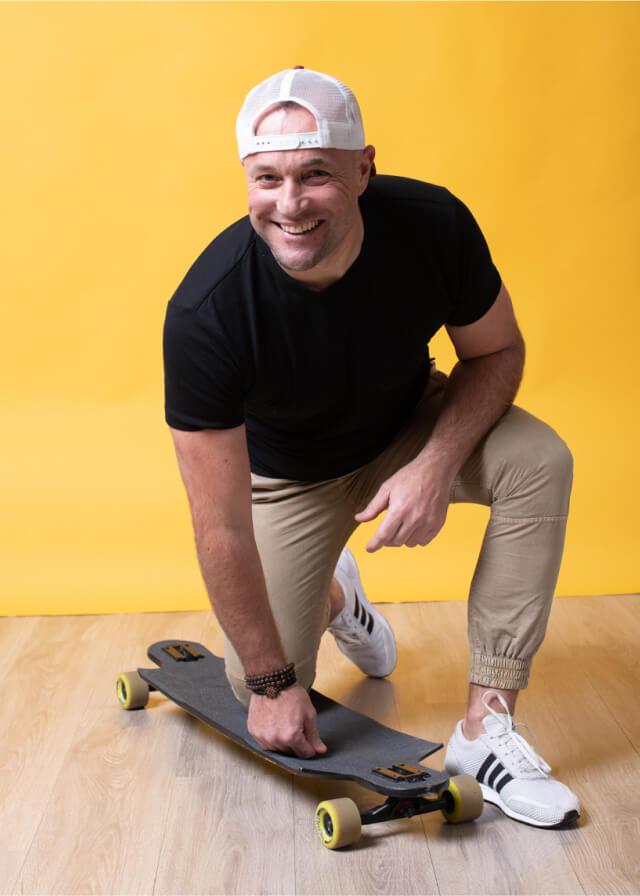 My name is Krzysztof. I have always been – and still am – an active man. I do not take life as it comes, but I create it myself. Maybe it was a matter of being busy or focusing on more important things, but the fact is that I don't know how and when the pointer on the scale reached 135kg. At first, I downplayed the problem because I had more important challenges and goals in life. However, the longer this condition persisted, the harder it became to fool myself into thinking that the weight was not a problem. Yes, it was – and it was a heavyweight problem. Constant fatigue, shortness of breath when trying to do sports activities, loss of attractiveness and having to start taking medication. I made my decision quickly. I was persuaded by my family doctor, who had been lucky enough to be under the care of the Baria3 team himself. I remembered what it was like just a few months prior to when I had to go in for my next hypertension medication.

Now, one and a half years after my mini gastric bypass operation, I have rediscovered what an active life is all about.  There is no challenge that I would not take on and no force that would stop me in my mad rush through life – a life that I live anew!

The BMI (Body Mass Index) calculator is a quick and convenient method to calculate your own body mass index. This index is used to determine the severity of obesity as well as to assess the risk of developing diseases associated with excessive body weight. The higher the degree of obesity, the higher the risk of obesity complications is, unfortunately.

The BMI (Body Mass Index) calculator is a quick and convenient method to calculate your own body mass index. This index is used to determine the severity of obesity as well as to assess the risk of developing diseases associated with excessive body weight. The higher the degree of obesity, the higher the risk of obesity complications is, unfortunately.